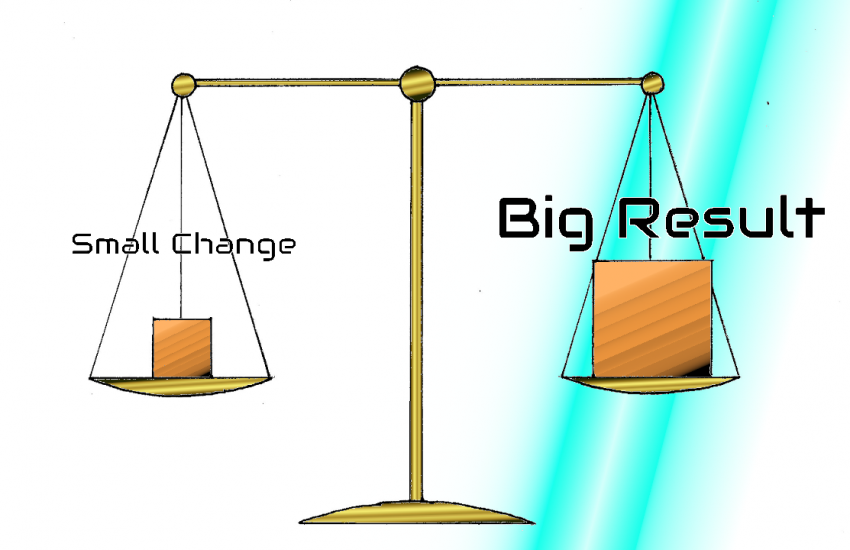 One of the most common dismissals of habit based lifestyle changes is that they are just too small to make any significant differences. People think that big problems must require equally large solutions to be resolved. But most big problems were not created in one go, it’s not like anyone ever went to an all you can eat buffet at their ideal body weight and ate so much that they came out 100lb over weight, it just can’t happen like that. Rather their excess weight is there because of a multitude of small changes compounding over time, and it has to be fixed in the same way, and I have the math to prove it. You just have to take a longer term view to see the difference.

Let’s say there are two twins, Extreme Eric and Habit Harry, who are celebrating their birthday today. They are identical in every way except for their approach to change. They are both equally over weight and decide to both lose weight. They plan to try their different approaches and meet back up a year later (they disagree a lot so only see each other on their birthday, obviously). I’m going to simplify things a little for the sake of brevity and clarity, so we will just compare calories so consumed rather than weight loss.

Extreme Eric decides that to lose weight he has to take the most extreme diet change possible and goes on a 4 week water-fast, consuming no calories at all. After the four weeks he goes back to his previous diet. He was consuming an average 2000cal a day, so that totals 56,000cal not consumed.

Habit Harry decides to only make a small change and drink one less can of cola each day. With each can having about 150 calories after, which is only 4,200 calories in 28 days, but after 365 days it reaches a total of 54,750cal not consumed; only about 2% less than Extreme Eric.

This means that Eric will have to repeat this stunt every single year just to maintain a slight edge over Harry each time they meet to celebrate their birthday.

This is of course assuming that everything goes to plan. Eric’s plan is of course highly dangerous and could result in serious health consequences, while Harry’s poses virtually no danger at all. Eric’s is also very difficult to see through; do you think you could go almost an entire month without a bite to eat? It’s possible, but the chances of cheating or giving up are a lot higher than with such a small change as Harry’s. And let’s say Eric and Harry both have a cheat day, Eric’s additional 2000 calories dwarf Harry’s 150, though a binge is far more likely. This means that habit based plans are a lot more relaxed than extreme ones as a slip up is far less consequential.

Another problem with such an extreme plan is how do you expand it? Let’s say Harry is unhappy that he was 2% behind his brother. When we first met him he was drinking 3 cans of cola each day, and having grown used to 2 each day, decides that for the second year one at dinner each night is enough. That now ups his total to a whopping 109,500 calories not consumed in the year, and he still didn’t give up soda completely! Eric would have to go almost 8 weeks without food, to match that, which is definitely not a good idea, while Harry still has many different ways to reduce his calories further without endangering himself.

As you can see, it is only in the short term that extreme changes show greater results. But they are too dangerous to repeat indefinitely (you will definitely die if you never eat anything again), this means that habit based and other more sustainable plans can easily equal or outpace them in the longer term. And one year is still pretty short term thinking; imagine the difference over a decade or even a lifetime! With that timeframe no change is too small to make a noticeable difference as long as it is repeated consistently.

If you enjoyed this blog and would like to learn more about habit based health change be sure to subscribe to my newsletter so you know every time I publish a new blog.