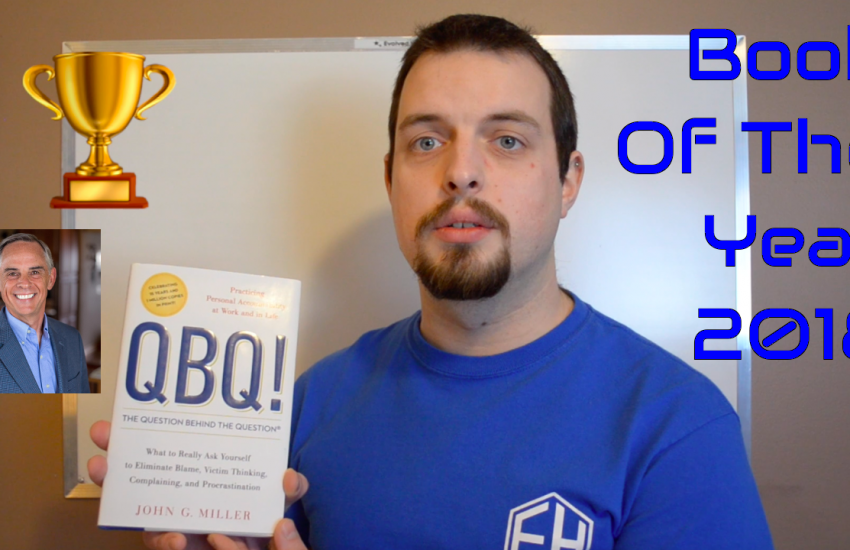 So last year I set my New Year’s resolution to be to read every day. I ended up reading 55 books, 16 of which were printed, the rest being audio books. I had planned for this to be a top 5; but it was just too hard, so many great books that I didn’t want to leave out. But choosing just one was easy; there wasn’t any question about which to choose. There was one book that I read in May that has ever since kept coming to my mind: “QBQ! The Question Behind the Question” by John G. Miller.

When I started listening I quickly discovered that this book wasn’t what I had expected when I picked up the CD at the library. I had thought the QBQ was going to be a motivational interviewing technique like the 5 Whys, not questions for me to ask myself. I thought about turning off the audio book after a few minutes, did I really want to listen to someone telling me how I was responsible for all my life’s problems for an hour? It seemed like a recipe for depression. But then I thought that it was so short, and I could count it to my total for the year, so I kept going. And I am glad I did, as I got into it I couldn’t turn it off and ended up listening to it all in one go; while it may not have been the book I wanted, it turned out to be the one I needed to hear.

QBQs are a way to reframe your complaints into questions that:

John G. Miller: QBQ! The Question Behind the Question

The purpose of this reframing is to banish victim thinking and blame; to remind yourself that you can only change you; and to take action. This creates a sense of personal accountability; which rather than causing depression as I had feared, seems to have cured mine.

I had suffered from bouts of depression and melancholia ever since I became sick as an early teen. But since reading this book I am in the longest stretch without even a hint of melancholy since I was a child. Every time a “why me?” question surfaces I have used the QBQ guide lines to change it to a “what can I do to make it better?” type of question. Now, instead of feeling trapped by circumstances I can for the first time see that whatever afflicts me is not a burden, but rather a problem for me to work through and solve. I know that I cannot rely on others to change to make my life better, but that I need to make the changes. I am now in control: no longer the victim, but the assured the victor. The feeling of being trapped that would spiral into depression has been banished.

Not only do I love the message of this book, but how it is written as well. John uses engaging storytelling to illustrate how to best apply the QBQ which makes his message more memorable. I also doubt that many other authors would have been so audacious as to write an entire book on a three point framework. Many other authors suffer from trying to cover too many topics in a single book, which only serves to dilute the message. This greater focus and clarity on the central message of the power of the QBQ means that it leaves you thinking about the QBQ long after turning the final page, magnifying its impact on your life many times over. The book is also quite short, easy to read in one or two goes. This makes it an easy book for regular rereading, for a quick refresher whenever you find yourself asking Incorrect Questions.

As I said before, there was no question which book got the top spot from me this past year. There were a load of great books, I even reread “The Book of Five Rings” which had had a similar influence on me as a teenager, but for 2018 this was the book. So it is with great pleasure that I present my virtual book of the year award to John G Millar for “QBQ! The Question Behind The Question”. If you ever feel as though you have no control over your life this book is for you!