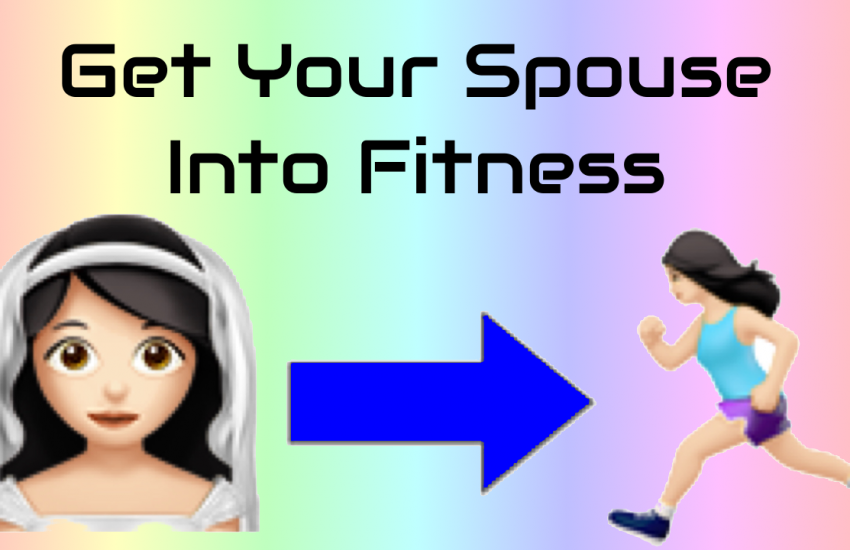 Over the last couple of years awareness over how your social health affects your physical health has grown immensely. And which social connection is the most important? The title probably gave it away, your spouse! Your spouse is the person who you socialize with the most and who has the most social influence over you (and if not, they might not be your spouse much longer, just sayin’).

The fact that your social connections, and your spouse in particular, have such large impacts on your health makes a lot of sense from a habit based perspective. When you first try turning a behaviour into a habit you can use all the help you can get. Imagine the following scenario: you have only just started going out for walks; you got back from a stressful day at work; you don’t really feel like going for a walk but decide you should go anyway. You come in to see your spouse on the couch eating your favourite snack and watching one of your favourite shows; you say “hey, I’m just going to go for a walk”.

What would happen if your spouse said “wait, don’t go”, patting on the couch, “come sit with me for a minute” and offered you the snack “watch the end of the show with me”? Do you think you would still be going? Remember walking is not a habit yet and you don’t really feel like it. If you are really being honest, probably not, right? And if that’s every night, say “bye bye” to the chances of walking becoming a habit.

Now what if instead they said “wait”, as they switch the tv off, “let me get my shoes on”. Would you still be going for that walk? Almost certainly, and if you have fun together chances of evening walks together becoming a habit is pretty high. They could also say “ok, have fun”, which doesn’t support your habit, but at least doesn’t undermine it.

Now the problem is that unless you are one of those guys who goes to the gym to hit on chicks, chances are your spouse isn’t into fitness. But if it’s so important, what are you to do? Well you can employ some of these 10 techniques that I used to get my wife into fitness, which has led to us each losing 40lbs and keeping it off for over a year already.

This is the most effective method, but also the hardest. This proves to them that your health and fitness is something that is really important to you. If you are sitting on the couch stuffing your face with chips and drinking soda and say to your wife “honey, i think you should cut out chips and soda”, she’s probably going to think “yeah right. Wait, did he just call me fat? I bet he just wants all the chips to himself”. But if you are eating a piece of fruit and drinking water and say “honey, I feel so much better since I cut out chips and soda, you should try it too,” you come across as much more serious and non-judgemental.

The problem with leading by example is that if your spouse might get a little suspicious that you are making these changes for someone else. So it is important to communicate the reasons why you want to improve your health (unless you really are cheating on them of course). I explained to my wife how I don’t want our kids to worry about our health like we have done for our parents. I also told her how I would rather spend time with her, but I want to invest this time so we can have a lot more time together than if we died in our 50’s.

Most of the time people dislike something simply because they do not know much about it. So you have to teach them. The problem is of course getting your spouse to actually listen to you, much of the time they see it as you trying to boss them around. An outside authority is a great alternative, but good luck getting them to read one of your favourite fitness books or go to a seminar with you, it’s just not going to happen. Instead what I found to work really well was watching health documentaries on NetFlix, or videos on youtube (may I suggest a certain channel, hint hint), it might take a little begging to get them to watch with you but it is a small commitment on their part so is pretty easy, and once their interest has piqued now you can introduce them to your bookshelf.

Make the same dietary changes you want them to make, even if you don’t feel you need to. If they need to cut back on soda, don’t drink it in front of them, and tell them they can’t have any, that’s just mean! But if you cut soda out it makes them feel like they are not in this alone and shows them that you really do care about their health.

Look for activities that you can do together. This way you won’t be sacrificing as much of the time they would like to spend with you for your health, and it will be good for their health too.

When they do find something that they like be sure to encourage it. If they want books about it, or if there is special equipment needed purchase some of it for them. The aim early on, is just to get them interested in physical activity, it doesn’t matter which one. Just don’t push too hard, as my wife says I do.

So you both think you have found the activity they will like and purchased the equipment; then suddenly they tell you they don’t like it anymore. Don’t get mad at them or insist they have to stick with it now, just let it go. If you allow them an easy out they will be far more open to trying new activities that you suggest in the future knowing that you will not force them to stick with it if they don’t like it.

Let them decide everything that they want to do, don’t force them to go on every walk with you, or with you every time you go to the gym, even if that is the activity you found to do together. You do what you have to, and let them set their own limits.

Ok, so there you have it, the 10 techniques I used to get my wife interested in physical fitness. None of these techniques work too well on their own, you can use all of them, or use some now, and some later. You could probably see a theme that ran through a few of them was summed up in the last point, let them be in control. Even though I am the expert I never told my wife what to do, I let her come to me with ideas, which we would discuss. Sometimes I would have to use my knowledge to point out the flaws in her ideas, but other times she gave me fantastic ideas. The key is just to get them involved and let them know they are in charge of themselves.